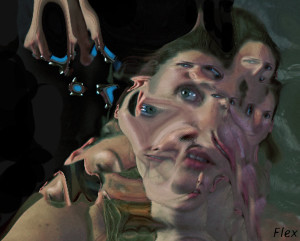 Festifools, the annual Ann Arbor event that celebrates foolishness and whimsey, will take a dark turn for its 10th anniversary coming up in April. Festival organizers are adopting a nightmarish “bad trip” theme for an event already known for its psychedelic and bizarre imagery. Parade Coordinator Roland Fowler says the darker motif is meant, in part, to appeal to those dealing with traumatic unresolved episodes of drug experimentation.

“Many of us have experimented with psychedelics in our youth and experienced the panic of nightmarish hallucinations and delusions, wondering when it would end and realizing we were only three hours into what would probably be a seven or eight hour trip,” said Fowler, “This may provide some catharsis or maybe even some nostalgia.  Others may want to experience it for the first time. We feel like this is a great way to mix it up and create some lasting, disturbing memories.”

While the traditional puppets and floats will portray a wide array of horrific scenes, major sub-themes will include disease, decay, grisly injuries, parasites, deformities, and the inevitability of death. Traditionally a family event, organizers have urged parents not to bring anyone under the age of 16, however a number of counselors will be on hand to assist any children or adults who feel overwhelmed by the display. In addition, Fowler said a troop of angry, demented clowns will aggressively patrol the event, ensuring that spectators show adequate appreciation for the parade and that no one leaves before the fun is over.

“Everyone’s excited about this year’s event, and about making a lasting impression that you won’t be able to forget even if you want to,” Fowler said, “Maybe next year we’ll swing back toward a brighter, funnier brand of whimsy but this year’s show is going to leave a mental mark.”