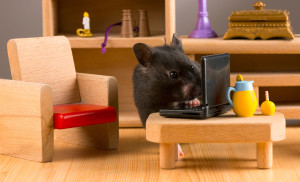 Rats exposed to high levels of anonymous online comments were four times as likely to develop brain cancer and six times as likely to develop ocular cancer. In addition, the exposed rats were significantly more likely to experience feelings of despair and worthlessness. These findings were part of a multi-year study conducted by University of Michigan professor Kristopher Padilla and published this week in the Journal of Applied Informantic Science.

Padilla explained that the rats were suspended in front of computer monitors which displayed slowly scrolling Internet content. Half the rats were exposed to highly rated kitten videos and the other half were shown an endless page of bile-ridden comments from Southeast Michigan’s online news site “MLive.com”. The rats watching the comments experienced much higher incidences of cancer and self-loathing.

“We think the mechanism involves interference with cellular mitochondria,” said Padilla. Mitochondria are the biological engines of living cells. Padilla says researchers think that the nauseating sewage-as-text drains the life-energy from the cells, leaving them helpless to cancer causing mutagens and oncogenes. The exact mechanics of how this gag-inducing Internet content can steal away energy from exposed cells is unclear, said Padilla, who hopes to continue to study the toxicity of the ungodly content.

“Pregnant women should avoid this cesspool of humanity altogether, until we better understand how badly a fetus is deranged by the mother’s consumption of these fetid messages.”

“I know I want to blind myself with a spoon when I read the Mlive comments. That’s what originally gave me the idea for the experiment,” said Padilla, “Now we know that parents should be very careful about exposing children to unfiltered and undiluted MLive comments.  Pregnant women should avoid this cesspool of humanity altogether, until we better understand how badly a fetus is deranged by the mother’s consumption of these fetid messages.”

“Our readers consider the comments section an important and rewarding part of their online news consumption experience”, Thornton said with the flat soullessness of a well programmed automaton. “We consistently hear that endless anonymous sniping between close-minded trolls is a valuable feature for MLive and a beneficial way to fully process local content.”

“This Tabitha Thornton unit is now in sleep mode,” she added.